African legend has it that God got upset with the baobab and kicked it out of heaven. It smashed into the earth upside down, with its roots sticking into the air.

Due to its size, an adult baobab cannot be mistaken for any other tree. They reach heights of over 20m, with trunks sometimes more than 10m in diameter. Trees this size are estimated to be between 2000 and 4000 years old and have served as landmarks in the vast African wilderness for centuries. 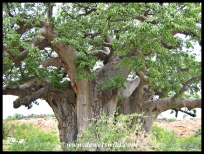 Von Wielligh’s baobab, between Olifants and Letaba in the Kruger Park, in the dry season 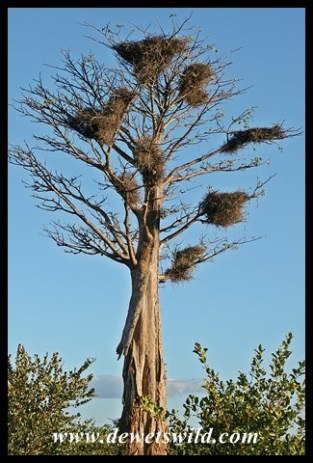 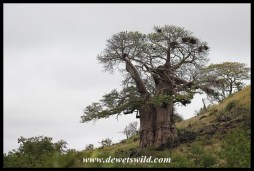 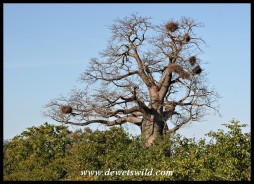 Baobab in a see of mopane, on the way to Bateleur 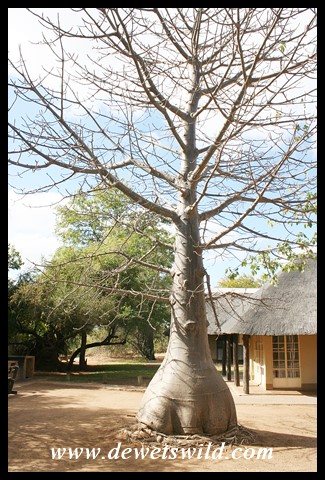 Small Baobab next to Rentmeester Guest House in Shingwedzi

Baobabs are deciduous trees, covered in dense green leaves during summer and completely devoid of their foliage in winter. The wood is very soft, and when the tree dies disintegrates quickly into a heap of fibres. 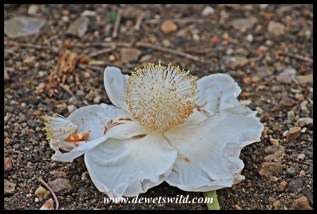 Unfortunately, elephants have a particular fondness for the baobab and especially the bark, often causing the death of the trees by their very destructive feeding habits. Several other animals, including baboons, monkeys, birds, and predators use the tree for food or shelter. 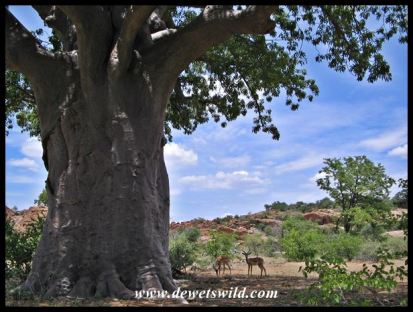 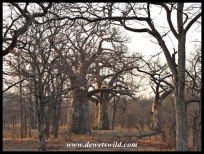 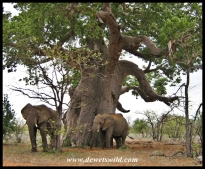 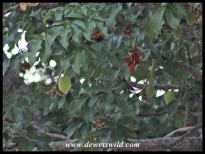 Baobab at Timbavati in the Kruger Park

The baobab has many traditional uses: the fruit can be used to make a most refreshing cooldrink with water or milk, the seeds roasted as a coffee substitute, the roots can be used to make a kind of porridge, young leaves cooked like vegetables, and the fibrous bark, apart from being used in traditional medicine, can be woven into mats used to build shelter or as floor covering.

In South Africa, the baobab occurs naturally only in the extreme northern and eastern parts of the Limpopo Province, with magnificent specimens to be found in the Kruger and Mapungubwe National Parks. 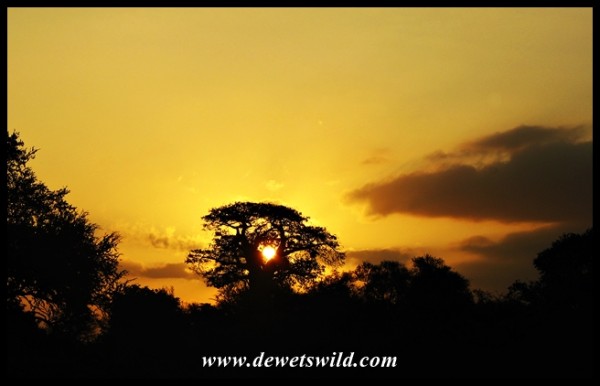 Days of torrential rain in South Africa’s northern provinces have caused severe flooding in two of the country’s National Parks – Mapungubwe and Kruger. It appears that our beloved Shingwedzi Rest Camp has been hit exceptionally hard, with about 70 staff members and their families having to be airlifted to safety from there this morning, just hours after the guests staying in the camp were safely evacuated by road. We have seen the Shingwedzi area being flooded in January of 2006, though the camp itself was never inundated then, and can only imagine what these people had to endure overnight. We are immensely grateful for their safety.

Update on the Mapungubwe floods

The recent heavy rains experienced in most parts of the country have resulted in the sudden temporary closure of the Mapungubwe National Park and World Heritage (MNP& WH) site. The park is inaccessible from Musina, as roads leading to the area are washed away.

In the last week, most of the roads within the Park were temporarily closed but the subsequent rains that were received in the area over the last 72 hours, caused the park to be closed temporarily until further notice.

According to Divhani Maremba, spokesperson for the MNP&WH, “most clients who were in the Park at the time are currently safely kept at Leokwe camp. Some tourists who were booked in the park last night and today were asked to postpone their holidays. We appeal to all the people to be very cautious when approaching the area.”

“Although some people cannot be contacted through mobile phones because of network coverage, we are constantly monitoring the situation around the park to ensure that we keep everyone informed of developments. Our emergency personnel are also on site trying to prevent potential disaster,” said Maremba.

“More rain is expected over the next two days and we advise all the people with confirmed bookings in the immediate future to contact our reservations office about the status of their bookings as the Park will be temporarily closed until further notice,” she concluded.

More information will be provided in this regard on the SANParks website periodically and on all social media platforms belonging to the organisation.

Update on the heavy rains in the KNP

Members of the KNP Disaster Committee met early this morning to assess the impact of the heavy rain in the Kruger National Park (KNP).

Members briefed the committee on their initial inspections and assessments regarding roads, water and sewerage, vehicle fleets, electrical and mechanical as well Protection through the Operation Centre, that has been set up in the Park.

There have been no reports of any major incidents throughout the park except the ones listed below.

Tshokwane: The low-level bridge to staff and ranger houses were reported as over flowing, resulting in personnel being trapped at the picnic site and others at houses, but their lives are not threatened.

Olifants and Sweni trails: Eleven tourists who were trapped on these trails have been safely airlifted to Satara.

Tamboti: The camp is isolated with 8 guests and staff including the section ranger. The water levels are being constantly monitored and a rescue plan will be executed to airlift them to Satara.

Talamati, Biyamiti: The camps have been closed and guests moved to the safety of Satara and Berg-en-Dal.

Houtboschrand: Four patrol rangers and a SANDF unit are stuck in the area, they are in constant contact with the Section Ranger and will be assisted.

Muzanzene: Four guests and one staff member have been air-lifted to safety.

Shingwedzi: All guests were evacuated to Mopani last night. 70 staff members are currently being evacuated.

H1/1 link road between Skukuza and Pretoriuskop has been closed off due to the heavy current over the low level bridge.

Crocodile Bridge Gate is overflowing and as a result the camp has been isolated and no cars are allowed through.

Lucy Nhlapo: Regional Manager Marula: KNP has reiterated her appeal to all visitors to the Park to stick to the tarred roads as all gravel roads have been closed for safety reasons.

At this stage all is still in order at the Skukuza Rest Camp, the biggest in the Park,  with the  Nwatsishaka river level slowly rising but flowing steadily, however the low level bridge is currently closed as water is overflowing at high velocity, while the high level bridge is being  constantly monitored.

The Northern part is still experiencing heavy downpours and the bush camps are still out of bounds. Visitors are still urged to drive only on tarred roads.

NB: All gravel roads in the park have been closed off for safety and motorists are requested to stay on tarred road.

“Generally our emergency plans are running accordingly and we’re constantly monitoring the developments, if anyone requires an update, our emergency 24hour hotline is available 013 735 4325. Please call to check on the conditions in the area you intend visiting” concluded Lucy Nhlapo. 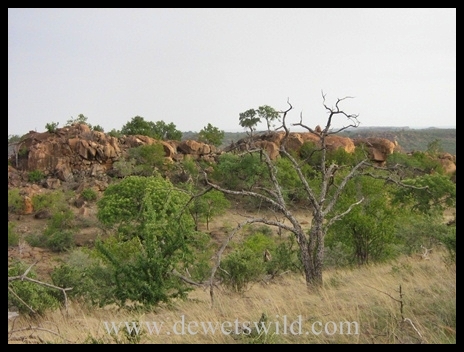 In the far north-west corner of South Africa’s Limpopo Province, on the border with Botswana and Zimbabwe, is a national park that protects not only a rich and diverse natural landscape, but also a fascinating cultural heritage.

Mapungubwe National Park was officially proclaimed only in 1995 (originally called Vhembe-Dongola National Park) and was conferred World Heritage Site status in 2003, but the area’s rich history dates back much further than that. Atop the inconspicuous Mapungubwe Hill, archaeologists have uncovered evidence of a thriving and advanced African civilisation, dating back to between 900 and 1250AD, trading with countries as far away as Egypt, India and China. This rich cultural heritage is today showcased in an award-winning interpretive centre and guided tours are presented to the archaeological site on and around Mapungubwe Hill.

The Park however has much more to offer nature enthusiasts though. The Park is home to large predators like lion, leopard and spotted hyena, a large number of elephants, many antelope species, zebra and giraffe, a huge variety of birds, reptiles and invertebrates, and interesting plant life – not least of which is the impressive baobabs. 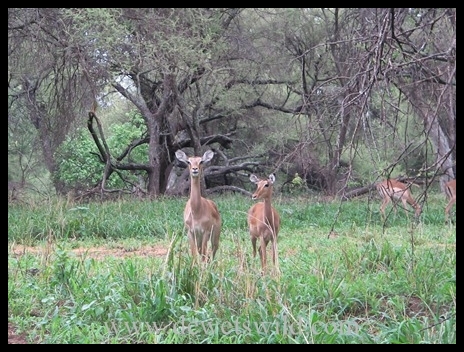 From a cliff-top viewpoint there are magnificent views over the confluence of the Limpopo and Shashe rivers where South Africa, Botswana and Zimbabwe meets, with a well laid-out picnic site nearby.

In the same general vicinity a unique raised walkway – high enough for elephants to walk underneath with ease and almost a kilometre in length – leads through the riverine vegetation on the banks of the Limpopo. Here the fever trees, with their yellow trunks, are particularly beautiful – a notice board at the start of the trail calls into memory a quote from one of Rudyard Kipling’s’ Just So Stories, The Elephant’s Child: “…till at last he came to the banks of the great grey-green, greasy Limpopo River, all set about with fever-trees…”. 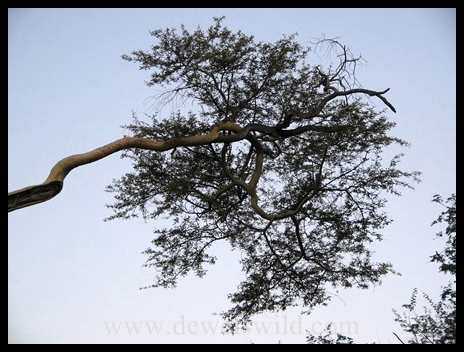 The Maloutswa Hide, in the western section of the Park, is another highlight not to be missed. Here, in a shaded, spacious wooden building overlooking a large pan one can easily while away hours watching the animals and birds come and go to slake their thirst at the water’s edge. 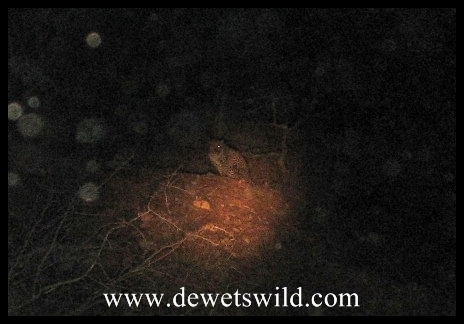 Today grand plans are being implemented to establish a unified trans frontier conservation area centred on Mapungubwe by incorporating state and private land from the three neighbouring countries – a praise-worthy initiative well worth supporting. 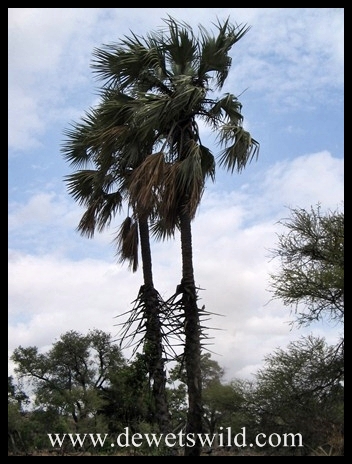 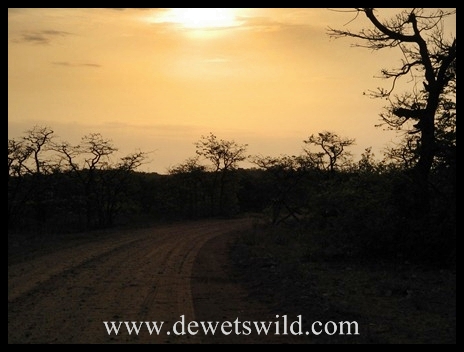 These close-up pictures of some smaller animal life was taken in the Mapungubwe National Park and World Heritage Site, in the far North-West corner of South Africa  where it borders Botswana and Zimbabwe:

Superbly camouflaged gecko in a chalet at Mapungubwe National Park

Baobabs are arguably the biggest trees we have in South Africa.

They occur naturally only in the far north of the country, and the specimens on show in the Mapungubwe National Park are particularly spectacular. 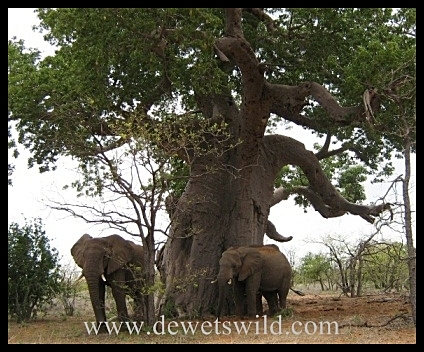