During our recent visit to Marakele National Park, while enjoying the magnificent view from the Lenong Viewpoint, we spied a little Eastern Rock Sengi basking in the early morning sun – a habit they are particularly fond of – behind a fence surrounding one of the communication towers also built atop the mountain. While the fence is a rather irritating obtrusion in these photo’s of ours, it is probably because of it that the Sengi felt comfortable enough to be out and about, safe in the knowledge that neither us humans nor any other predator could reach it! 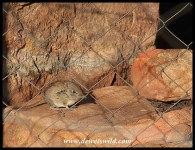 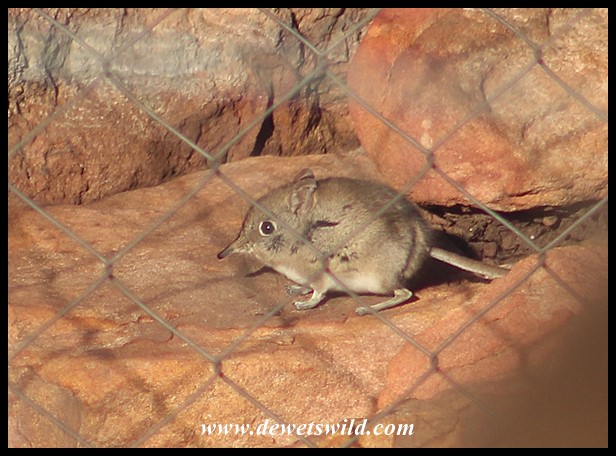 The Sengis, or Elephant Shrews, (order Macroscelidea) are a family of 20 small, insectivorous mammal species occurring only in Africa. While they’re superficially very shrew-like they are in fact not related to shrews at all (and they are in fact more closely related to elephants, even if their “trunks” aren’t nearly as long and prehensile), which is why the scientific community is trying to move away from the old moniker in favour of Sengi, a name based in indigenous African languages.

The Eastern Rock Elephant Shrew, or Sengi then, occurs widely in South Africa’s northern and eastern provinces and throughout Zimbabwe, extending into portions of Lesotho, Eswatini, Botswana and Mozambique south of the Zambezi. The IUCN considers it to be of least concern.

As suggested by its name, the Eastern Rock Sengi is always found in close association with rocky areas where they hide in cracks and tiny caves among the boulders. Here they subsist on a diet that consist of insects (mainly ants and termites) and other invertebrates, though they will also eat seeds. They are diurnal, very rarely venturing out in the dark. They are also very alert and nervous, usually dashing for cover at the slightest disturbance.

Eastern Rock Sengi’s are mainly solitary and seen in pairs only while they breed during spring and summer. Females usually give birth to twins after a two-month long gestation. The young are very well developed and can move around with their mother soon after birth. Fully grown, Eastern Rock Sengi’s measure about 26cm long (of which the tail is more than half) and weigh approximately 60g. They have a very short lifespan and may live to only around 18 months of age in the wild.