Wedged into a remote corner of South Africa’s Northern Cape, between Namibia and Botswana, lies a very special piece of the Kalahari Desert. Here a wilderness of dunes, pans and dry, sandy river beds is a safe refuge to a rich variety of natural life, and one of the last fully functional ecosystems remaining on earth. The beds of the Auob and Nossob Rivers very rarely boast flowing water – the Auob perhaps once in ten years, the Nossob only once or twice in a century. 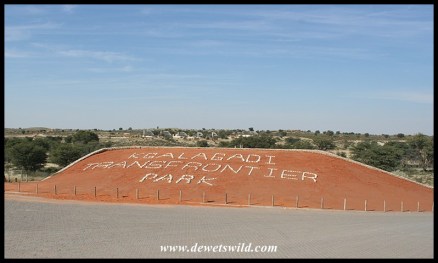 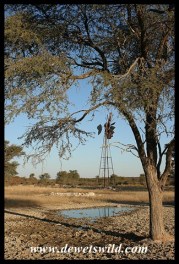 Gemsbok herd on the move

Gemsbok in the Auob River

When the First World War broke out over a 100 years ago, the British Colonial government of the Union of South Africa and British Bechuanaland considered the beds of the Auob and Nossob Rivers a strategic access into German South West Africa and started sinking boreholes in the rivers to supply advancing troops. After the war, the area was divided into farms by a Scotsman, Roger Jackson, explaining how many of the waterholes today carry very Scottish-sounding names. The newly settled farmers however found it tough going – the fascinating museum at Auchterlonie providing a glimpse into this hard life – and had to turn their rifles on the herds of game moving through the area in order to make a living. 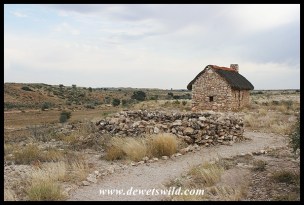 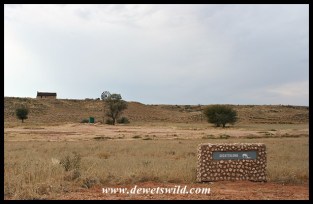 Auchterlonie waterhole with the museum in the background

With the game population falling drastically, and shortly after South Africa’s first national park was proclaimed (the Kruger in the then Transvaal) two influential men from the region invited then Minister of Lands, Piet Grobler, on a “hunting trip” in the Kalahari and deliberately took him to an area denuded of wildlife. So disturbed was the minister by the lack of game that he immediately set about the process of proclaiming the area between the Auob and Nossob Rivers South Africa’s next national park – the Kalahari Gemsbok National Park coming into official existence on 31 July 1931. Soon more land to the southwest of the Auob and its confluence with the Nossob were added, bringing the size of the Park to 9,600km². Then, in 1938 the government in neighbouring Bechuanaland (today Botswana) proclaimed an even bigger piece of land on the other side of the Nossob (the unfenced international boundary between the two countries) the Gemsbok National Park. Informally the two conservation areas were managed as a single unit ever since, but it wasn’t until 1999 when the leaders of the two countries signed a treaty to formalise the arrangement. The Kgalagadi Transfrontier Park, covering over 34,500km², was officially opened on 12 May 2000 and is one of the biggest, and most unspoiled, conservation areas on the planet. 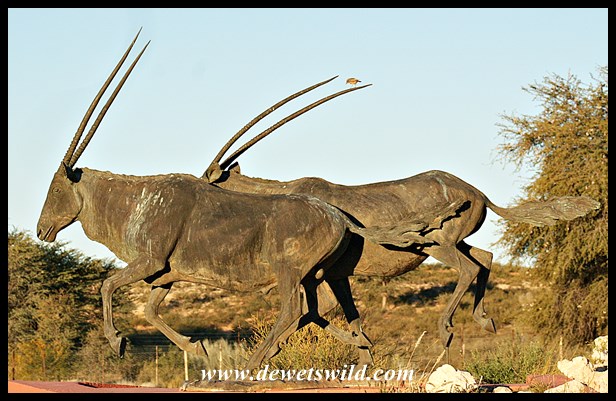 Gemsbok statue at Twee Rivieren’s reception, symbolic of the two “Gemsbok” parks joining together to form the Kgalagadi Transfrontier Park

On the South African side of the Kgalagadi Transfrontier Park guests have a choice of three “traditional” rest camps offering basic amenities like accommodation, camping, a shop, fuel station, swimming pools, and guided walks and drives. Twee Rivieren is the main entrance, biggest camp and administrative centre of the Park (it also has a restaurant and border control) and offered the first tourist accommodation in the Park in 1940, while Mata Mata (on the Auob River, opened 1955) and Nossob (on the Nossob River, opened 1966) lie deeper into the Park, about 120m and 160km away from Twee Rivieren respectively. Union’s End marks the point where the borders of South Africa, Botswana and Namibia meet and is one of 6 rustic picnic sites available on the South African side of the Park. Six smaller Wilderness Camps are also spread throughout the Park – these offer only accommodation to overnight visitors. Between Twee Rivieren and Mata Mata lie the Kalahari Tent Camp, Urikaruus and Kieliekrankie, between Nossob and Mata Mata is located Bitterpan while Gharagab and Grootkolk is located north of Nossob on the way to Union’s End. While there’s around 500km of prepared roads (very sandy and corrugated in places, not recommended for sedans) to explore the Park in relative comfort, there is also a selection of guided and self-guided 4×4 trails available. 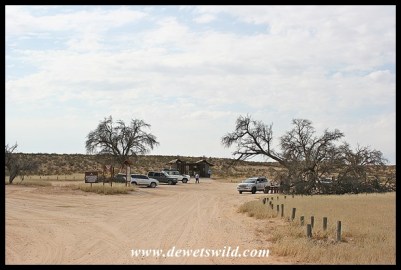 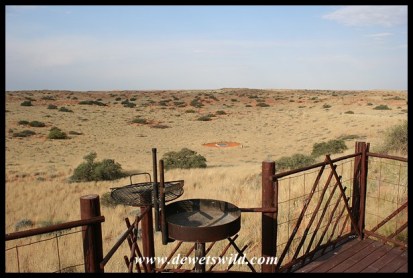 View from the units at Kieliekrankie

The Kgalagadi Transfrontier Park must be one of South Africa’s most out-of-the-way tourist attractions, lying about 1060km from Pretoria and 1040km from Cape Town. The nearest major airport with daily flights is at Upington, about 250km away from Twee Rivieren. 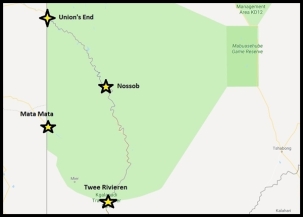 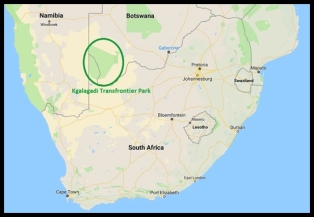 The location of the Kgalagadi Transfrontier Park

For such an arid area – average rainfall measures around 200mm per annum – the Kgalagadi Transfrontier Park is home to an astonishing variety of wildlife. Apart from a wide variety of desert-adapted plants and invertebrates, the Park’s lists boast 62 kinds of mammals, 274 species of bird (of which 78 are resident throughout the year), 48 sorts of reptiles (including 17 snake species) and seven kinds of frogs. 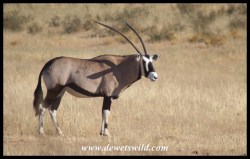 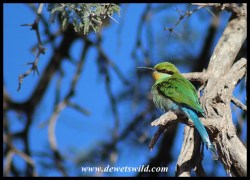 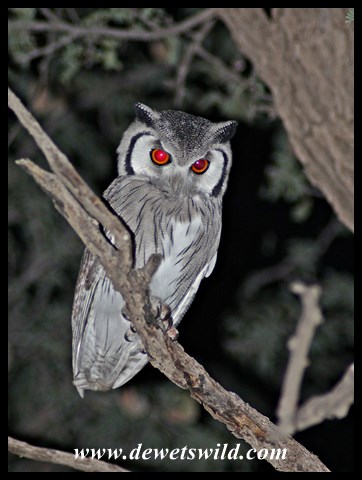 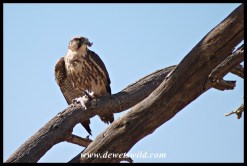 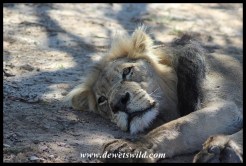 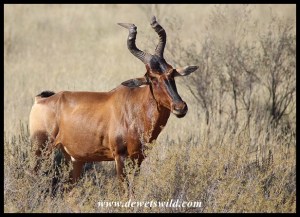 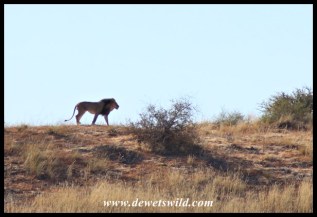 Lion on a dune in the Kgalagadi 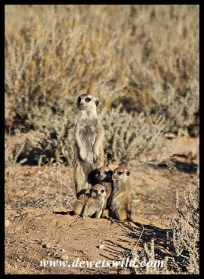 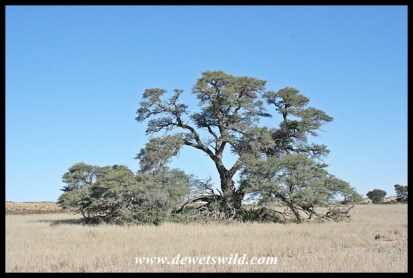 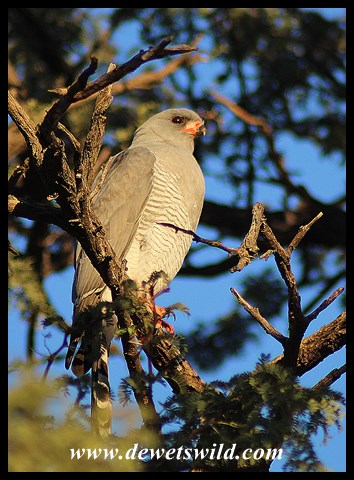 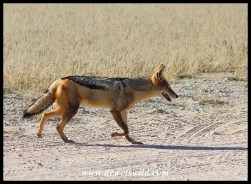 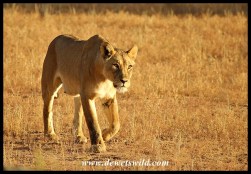 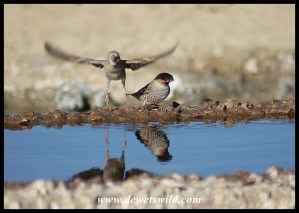