South Africa’s national bird is a relatively small, blue-grey species of crane that stands around a meter high, with a wingspan of up to 2 meters and a weight up to 6kg.

Blue Cranes inhabit open grasslands, karoo-scrublands, fynbos and marshes, and have adapted to feeding in grainfields and pastures where these intrude into their preferred habitat. Grass and sedge seeds are their primary food source, though they’ll also take insects, frogs, crabs, and small reptiles and mammals. Blue Cranes are diurnal, roosting in wetlands at night.

Outside the summer breeding season Blue Cranes congregate in large (from 50 to 1000 birds), nomadic flocks, while in the breeding season they can be found in pairs or family groups. They perform an elaborate courtship dance, involving running, jumping, flapping and calling. Two eggs are laid in a simple nest constructed of reeds or grass in marshes and grasslands, and parents take turns to incubate the clutch for around 30 days. Any animal – human, herbivore or predator – is relentlessly attacked when they come too close the nest.

Blue Crane sharing its range with a plains zebra 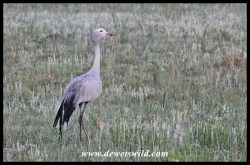 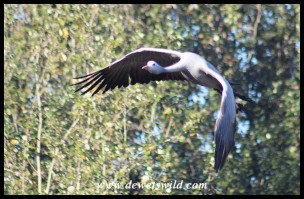 Blue Crane on the wing

The IUCN considers the Blue Crane “Vulnerable” as their population has been seriously decreased by poisoning, loss of habitat and collisions with power lines. Population estimates put their numbers in the region of 25,000 in South Africa (almost half of which can be found in the Western Cape Province) with less than a 100 in neighbouring Namibia.