There’s several waterholes in the Kruger National Park that have delivered us consistently good wildlife sightings over the years. One such drinking place is Mooiplaas, an artificial waterhole supplied by a borehole and windpump, adjacent to a natural wetland, about 5km to the south of Mopani Rest Camp. Directly translated from Afrikaans, Mooiplaas means “pretty farm”. The waterhole undeniably lives up to its name both in scenery and for the constant stream of birds and animals moving from the surrounding mopane vegetation to slake their thirst.

We visited Mooiplaas again on Heritage Day (24th September) while on our most recent visit to the Park. We arrived in the heat of the day, and found the place brimming with animals. Elephants, tsessebe, zebras, wildebeest, ostriches and a lone kori bustard were milling around, and from their behaviour we deduced that there must be predators around. Sure enough, in a clump of mopane shrubs, we saw two lions hiding from the heat; the female just out in the open enough to get photographic proof. It was obvious that these lions were not interested in hunting, and the animals could safely venture to the water for the moment. A young elephant bull caused a bit of an uproar among the plains game when he caught the lion’s smell on the wind, and started running around wildly, kicking up dust as he went. 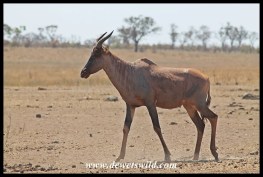 Tsessebe and zebra at Mooiplaas 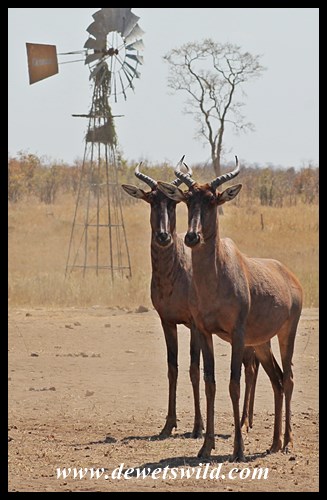 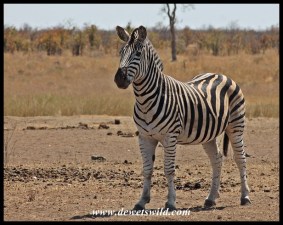 After checking in for our night at Shipandani Hide, we decided to stop by Mooiplaas again in the late afternoon, and found that the lions had still not moved from their shady hideout. A group of elephant bulls were drinking from the reservoir, and a variety of birds were searching for food in the dust, but there was no sign of the large herds of zebra and antelope that frequented the area earlier in the day. Perhaps they understood that the lions would not be resting for much longer…

Throughout the night in the hide we could hear the lions roaring towards Mooiplaas, and of course that’s where we headed as soon as the gates opened. If the lions had made a kill during the night, the carcass wasn’t anywhere we could see it, and we had to be content with a far-off sighting of two large males lying in the grass some distance from the otherwise deserted waterhole.

All too soon we had to leave, as we were heading for Shingwedzi and still had to return the keys for the hide to the reception at Mopani. Leaving Mooiplaas behind, we knew there would be more wildlife spectacles unfolding there that day. And we knew we’d return to Mooiplaas again as soon as we have the chance…