A small group of people are inspecting a dung-covered thorn-bush out in the African wilderness, the sun having just peeked over the eastern horizon, listening enchanted to their guide explaining the scene: “Long ago, the hippo lived on land with the elephant, the rhino and the buffalo. But Hippo complained bitterly to the Creator that his skin was far too sensitive for the African sun and pleaded to be allowed to live in the water. Crocodile wasn’t at all pleased with this arrangement though, fearing that the bulky hippo would eat all the fish in the river. Hippo then promised to spread his dung with his tail so that Crocodile could check that there was no fish bones in it. But the crocodile was still not convinced, as he’d have to go onto dry land to check Hippo’s dung, so Hippo put Crocodile’s mind at ease by saying that the rangers would check the dung on his behalf. And this is what we’re doing now, just checking that Hippo is keeping to his agreement with Crocodile”

My brother Niel and I arrived early morning on Saturday 15th of June for our annual brothers-trip to the Kruger National Park. We’d slowly make our way up to Satara Rest Camp that day, before joining the Olifants Wilderness Trail on Sunday afternoon at Letaba Rest Camp. Lots of time for relaxed game-viewing and photography along the way, and Kruger delivered the goods as always. 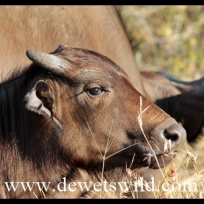 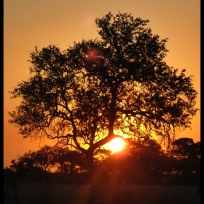 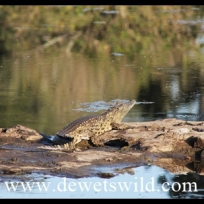 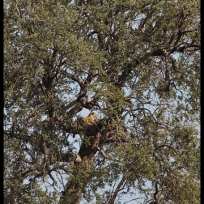 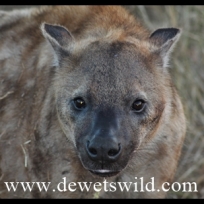 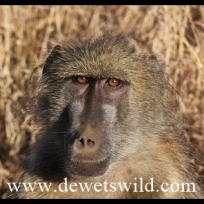 At 15:00 our Trail Guides Aaron and Louis meet up with Niel and I and the six other participants with whom we’ll be sharing our much-anticipated wilderness experience for the next three nights. It’s a two-and-a-half hour drive to the base camp, with frequent stops to appreciate the scenery and rich bird and animal life for which the Kruger Park is so renowned, and by the time we arrive darkness had already engulfed the small rustic camp. 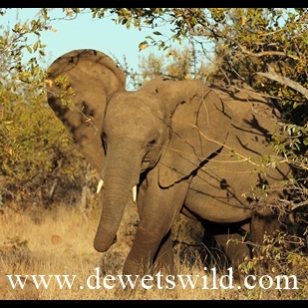 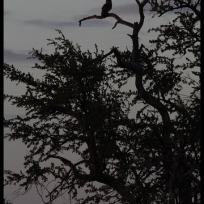 The road into the wilderness

The unspoiled African wilderness quickly makes friends of strangers, and there’s nothing to help the process along like a camp fire – or bush TV as Louis describes it because it’s so hypnotic. In the light of the dancing flames and with the grunting of hippos in the background, Aaron explains our schedule for the next three days and goes through some basic safety pointers for walking among dangerous wild animals. There’d be two days of walking, each starting with an early wake-up, coffee and rusks before dawn. At first light we’d drive a short distance into the wilderness before setting off on foot, spending four to five hours in the veld and enjoying a light picnic breakfast at a scenic spot, before returning to base for lunch and some quiet relaxation. The afternoon walks would be at a slower pace, taking in the setting sun from a beautiful vantage point, where after we’d return to camp for dinner before relaxing around the camp fire again. We’re also introduced to Shadrack, the shy camp caretaker and the cook responsible for the hearty traditional South African meals we’d enjoy for the next couple of days.

When walking in the bush, the focus shifts from the big hairy scary creatures to the smaller features that would normally go unnoticed while driving through the Park, although there’s always a good chance of encountering big game along the way. Easy to understand therefore why your heart would start racing when a scrub hare unexpectedly jumps up next to your feet while walking through the tall “adrenalin grass” next to the Hlahleni stream! 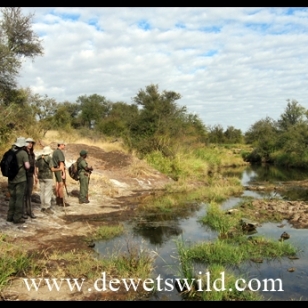 Nice spot for a morning picnic

Dung beetle balls dug up by a ratel (honey badger) 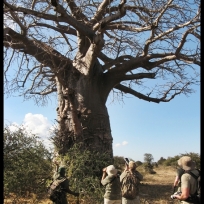 Dwarfed by an ancient baobab 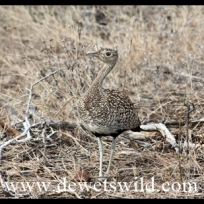 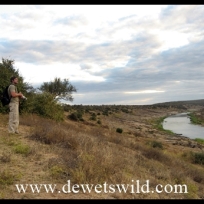 Remnants of a muddy puddle 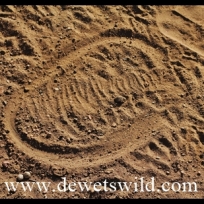 Impression of an elephant trunk in the dust 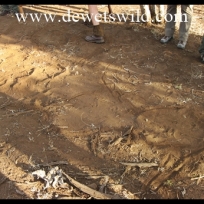 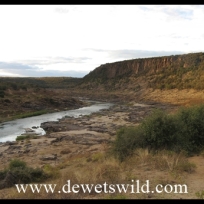 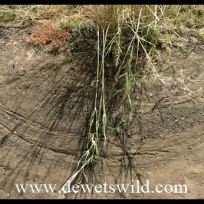 The Olifants Wilderness Trail has been running since 1979, and the little base camp is as rustic today as it was then. Four A-frame huts, each with two beds, provide accommodation to the trailists, who enjoy their meals and each other’s company at the communal boma and fireplace which has a commanding view over the Olifants River and the Lebombo Mountains. At the back of the camp are the pole-enclosed toilets and hot-water showers. There’s no electricity (or cellphone reception) at the camp, so in the evenings and early mornings paraffin lamps add to the camp’s peaceful atmosphere. This is wilderness at its uncluttered best, and a rich variety of birds and animals visit the camp and surrounds throughout the day. 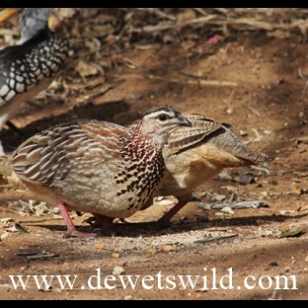 Sitting atop a large boulder next to a deep river pool, watching the sun set over the Olifants while hippos are snorting and splashing just metres away, was the absolute highlight of our Olifants Wilderness Trail experience; an abiding memory that will remain with us forever. 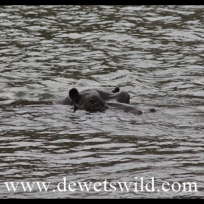 Inspecting the humans on the rock

Walking down the Olifants’ steep banks 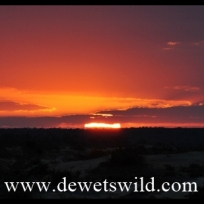 All too soon the time came to return to civilisation. The mood on the vehicle was a lot more sombre on the way back to Letaba, and it was with heavy hearts that we said goodbye to Aaron, Louis and our fellow trailists. 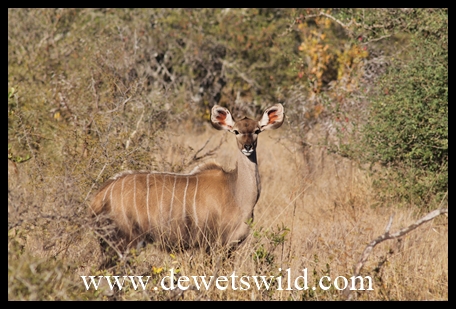 For Niel and I it was time to head back to the city, but Kruger had one more surprise in store for us on the way to Phalaborwa Gate. Masthulele, currently the biggest of Kruger’s Tuskers, accompanied by two younger bulls, was enjoying a drink from a pool in one of the dry river courses. How nice it was to bump into this familiar old friend! 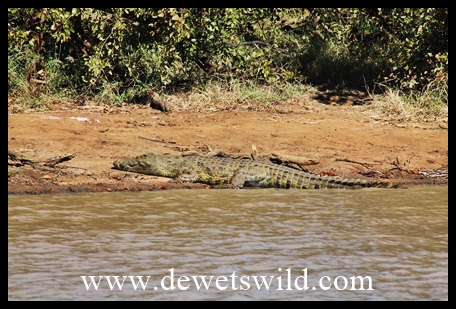