When first confronted with the monstrously-sized Rain Spider I don’t think any person could be blamed for flinching. These arachnids can attain a leg span of up to 11cm, with their bodies alone growing to 4cm in length, and unusually for spiders both sexes are about equal in size. Their sizable fangs easily pierce human skin, but while a bite is painful and could cause a bit of swelling and itching it is not venomous.

Rain Spiders are nocturnally active predators that by nature hide and hunt in vegetation but often enters into huts and houses to prey on insects attracted by lights. It’s believed, though not conclusively proven, that finding Rain Spiders indoors is a good omen for rainfall in the days ahead. Being such formidable hunters they not only prey on other invertebrates but will even catch reptiles and amphibians.

Females may lay up to 300 eggs in large egg sacs, roughly the size of a tennis ball or even larger and constructed from leaves, twigs and silk, during the summer months. The female protects both the egg sac and newly emerged spiderlings, which hatch around three weeks after laying, and as a result it is usually gardeners that fall foul of the protective mother’s fangs when they’re out enjoying their hobby. Rain Spiders usually live for about two years.

Spiders of the genus Palystes are found in Africa, Asia and Australia. We have twelve distinct species in South Africa, of which P. superciliosus and P. castaneus are the most commonly encountered (though not easily distinguished by an untrained eye like mine).

Rain Spider, the size of a cake plate!

Large Rain Spider on a dustbin at Mission Rocks 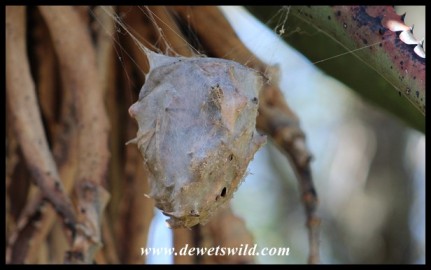 Rain Spider curled up in self-defense

Rain Spider curled up in self-defense

The Rain Spider Wasp is a specialist hunter of Rain Spiders occurring in South Africa and Zimbabwe. When hunting, the female wasp paralyses the spider with a sting and then carries it’s victim to its nest where an egg is laid on the spider before the nest is sealed up. When the wasp larvae hatches it feeds on the still living spider, keeping the vital organs for last so that the spider can be a source of fresh food as long as possible. Once its larder is used up, the larvae pupates and emerges as an adult wasp – which feeds innocently on nectar. Rain Spider Wasps themselves are quite large and adults measure almost 5cm in length.