All bats from the family Molossidae share a unique feature, in that their tails are not fully enclosed by the membrane between the hind legs as in other carnivorous bats (clearly shown in the pictures below). Identifying them down to species level in the field is exceedingly difficult, and even experts often have to rely on a close examination of teeth structure and genetic analysis to achieve that. The familial name comes from these bats’ resemblance to the Molossus dogs,  forebears of today’s mastiffs, kept by the ancient Greeks.

Nine species of Free-tailed Bats occur in South Africa, with the Egyptian Free-tailed Bat (Tadarida aegyptiaca) the most common and widespread, being found in virtually every corner of the country, while the other species all have much more limited distributions within our borders. At least one species, the Large-eared Free-tailed Bat (aka Large-eared Giant Mastiff Bat, Otomops martiensseni) is considered vulnerable to extirpation from the country as it occurs in only a handful of colonies in and around the city of Durban.

The South African representatives of this large bat-family range widely in size, weighing between 10 and 50g with wingspans ranging from 25 to 45cm depending on the species.

The Free-tailed Bats are among the fastest and high-flying of all bats. Most of the species occur in woodland and riverine forests, others prefer rocky terrain while a few others have a very wide habitat tolerance. Only a few species have adapted to using buildings, and especially roofs, as shelter; most prefer natural roosts like caves, crevices and hollow trees. The Free-tailed Bats are gregarious, often congregating in groups several hundred strong, and entirely insectivorous (different species often have a preference for different kinds of insects, preferring for instance mosquitoes, moths or beetles over other options).

Female Free-tailed Bats give birth to a single baby at a time, some species breeding at any time of year while others have birthing peaks in the summer months. 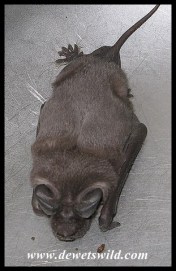 Free-tailed Bats roosting beneath the thatch at Mooiplaas’ ablutions 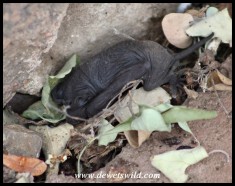