One of the most touching sightings of our recent Satara Summer in the Kruger National Park was of an elephant bull trapped in a shallow pan (waterhole) and unable to get out. Just how the bull ended up in this predicament was unclear as we arrived on the scene too late to know – perhaps it was simply something as benign as taking a mud bath gone wrong, or perhaps something as violent as a debilitating blow received in a fight for dominance. However it may have occurred, we spent several hours in the exceptional heat wishing him on every time he tried lifting his massive bulk out of the mud, watching with lumps in our throats as other elephant bulls, obviously distressed, tried to help and failed, how they had to give up on their valiant attempts, extending trunks towards their comrade as if in a final greeting. Eventually the hopelessness of his situation became too much to bear for us too and with every pause in his feeble movements we hoped that he has finally breathed his last, only to see the tip of his trunk being raised limply above the waterline once again, over and over. Why won’t he just let go..?

Dusk settled over the plains and we had to leave to get back to Satara in the knowledge that he was unlikely to see the sun rise tomorrow. Difficult as it was to watch, we realise that tragedies like this have played out in the wilderness for millennia, nature taking its course without human interference, as it should and will continue to do in places like the Kruger National Park, and whether we were there to witness it or not made no difference to the outcome.

Big old bull, but couldn’t save his friend

Are they contemplating a rescue plan? (photo by Joubert)

Are they contemplating a rescue plan? 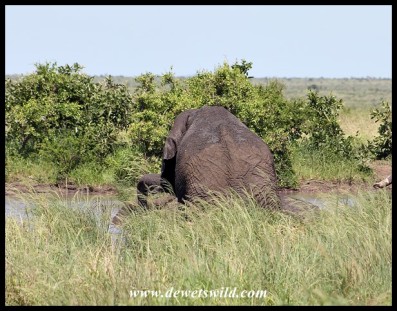 Giving it another try 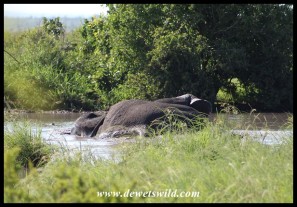 Elephant stuck in a muddy pan 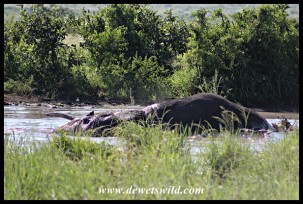 Was this bull as sad as we were to leave his comrade?
Advertisement

39 thoughts on “When an elephant won’t let go…”