During September (2018) we had the opportunity to watch a pair of Laughing Doves incubate a clutch of two eggs and raise their squabs in our backyard.

They started incubating the eggs on the 8th of September, and 12 days later the hatchlings emerged. Sadly one of the chicks only lived for six days, the reason for its demise being unclear, and Marilize had to watch as its mother unceremoniously pushed its body out of the nest.

Five days later even more tragedy struck as both parents abandoned the remaining chick when it was only eleven days old and still incapable of fending for itself. We had no idea what happened to the parents, who up to that point seemed very devoted, and therefore we first opted not to interfere at the nest in the hope that they’d return soon enough to resume caring for their youngster before it got too weak.

Yesterday, with more than 24 hours elapsed since the last time the adults visited the nest and still no sign of them, Marilize and Joubert took the little one to a local veterinarian who will take care of it until it is big enough to release. 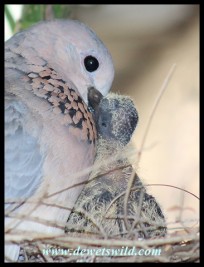 Our tragic laughing dove pair were in the family way again. Late in October we saw them cooing around each other at the nest where they tried raising their first family in September. On the 28th of October, we noticed the first egg in the nest and on the morning of the 31st the clutch was complete with a second egg and they started incubating, facing some harsh weather (heat and rain) in the process. The first hatchling made its appearance on the 11th of November, and by the 12th the pair had discarded the second, unhatched, egg. Sadly, on the afternoon of the 13th of November, the little chick also died – it might have choked as we watched it being fed by the mother not long before. Unceremoniously the hen kicked the little body from the nest and flew off.

We sure hope that this Laughing Dove pair will try again and hopefully be successful with their next attempt at rearing a family.

The first egg was laid on the 28th of October 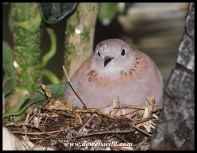 Sitting tight on the nest during a rainstorm (1 November)

Sitting tight on the nest in 40-degree heat

The first chick hatched on the 11th of November

The pair of Laughing Doves at the nest

Sadly the single chick died on the 13th of November.