The Brubru is a member of the shrike family occurring in savanna and woodland habitats, and specifically those dominated by Miombo, Mopane and Acacia trees. They feed mostly in the canopy, searching for insects and other invertebrates. Brubrus are about 14cm long and weigh around 24g

Brubrus are usually encountered singly or in pairs but will join groups of other insectivorous birds moving through their home range. Both parents work together to construct the small, neat and well camouflaged cup-shaped nest of fine plant material and spiderweb. Clutches of 1-3 eggs are usually laid in spring and summer (breeding attempts have been recorded throughout the year) and incubated by both parents for just short of 3 weeks. The chicks leave the nest when they’re 3 weeks old and are fully independent by the time they’re 3 months old.

In South Africa the Brubru can be seen in Kwazulu-Natal, Mpumalanga, Limpopo, Gauteng, North-West and the north of the Northern Cape Province. Brubrus are also found widely over sub-Saharan Africa, with the exception of desert and forest areas, and the IUCN considers them to be of least concern. 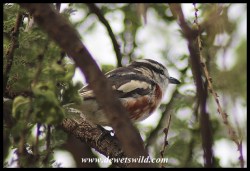 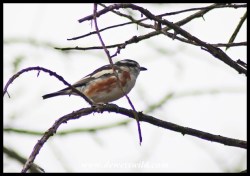