Although the Hippopotamus seldom needs any introduction, most people are entirely unaware of just how big these portly animals are. Bulls can reach 1.7m high at the shoulder and weigh as much as 3,200kg (though usually around 2 tons), while cows are smaller, reaching weights of 1,700kg. 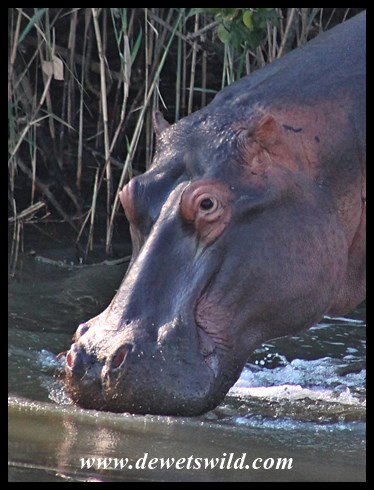 Hippo on land showing their short legs and portly body

Hippo posturing at the Balule causeway

Hippo eyeing us from the Sabie River

Hippopotamus require deep, permanent pools in slow-flowing rivers, dams and lakes, usually with exposed banks and islands and easy access to grazing grounds. They consume 100kg or more of fodder daily, consisting mostly of grass but will also feed on fruits, reeds and other waterplants. Areas subject to heavy grazing by Hippo take on a park-like appearance, with short “mown” lawns. They have been recorded taking carrion from carcasses. In times of drought hippos will travel up to 30km in a night to reach grazing, and will try to make do with any water or mudhole as protection from the sun.

Hippos lazing in the water 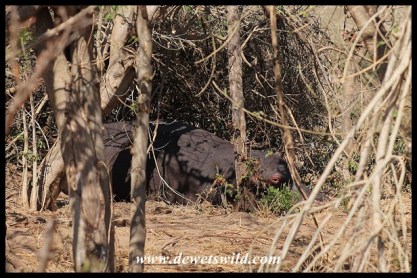 Hippo hiding in the shade of a bush

Young hippo looking for something to eat

Pod of hippos in the bed of the Olifants 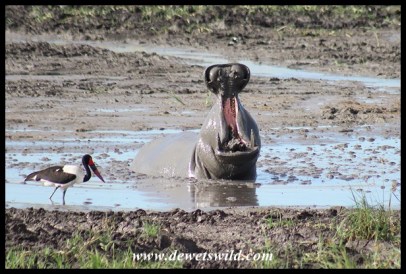 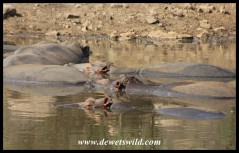 Hippo in the dark, grazing past our camp

Hippo making the most of the overcast conditions

Hippos live in herds consisting of a territorial bull, cows and calves, numbering from 2 to 200 (usually around 15). The territorial bull will tolerate other mature bulls in his area provided they act suitably submissively – if not, terrible fights will break out in which one or both combatants are often killed. Inside the group the cows also maintain a strict hierarchy. Territories are demarcated by dungpiles and scattering droppings on prominent bushes and rocks by flicking the tail. Hippos follow specific trails between their waterhole and feeding grounds, and is especially dangerous when encountered along these. In fact, Hippos are among the most dangerous of African animals and cause several human deaths annually. Instances have also been noted of Hippos killing (by drowning or biting) other herbivores or crocodiles which venture too close. They are surprisingly fast on land, capable of speeds in excess of 35km/h, and are just as fast in the water. Hippos are most active at night, preferring to spend the hot daylight hours lolling in the water or baking in the sun on a sandbank and then heading out to feed at dusk.

What seems a lazy yawn may be a threat display

Hippos in a deep pool

Hippos baking on a sandbank

Young hippo resting on an adult

Hippos lazing on a sandbank in the Nwaswitsontso River

The normal view of hippos, lazing in a pool of water on the Sweni River

Hippo encountered on a night drive from Olifants

Another pod of hippos at the Ngotso weir

Hippo highway leading from the water 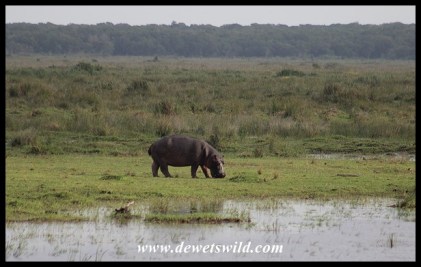 Most Hippo calves are born in the rainy season, when cows give birth to a single offspring after a gestation of about 8 months. The calves are usually born in reedbeds, where they remain hidden for a few weeks before being introduced to the herd as bulls are known to kill calves, even their own. Cows are incredibly protective of their young and nursing usually takes place in the water. Thanks to their large size and aggressive nature, few Hippos succumb to predator attacks, though lions, hyenas and crocodiles will attempt to catch calves given an opportunity. Drought and starvation are the biggest cause of natural deaths in Hippo populations. They have a life expectancy of up to 50 years in the wild. 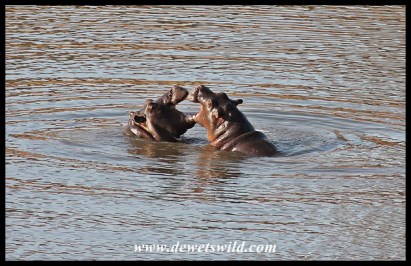 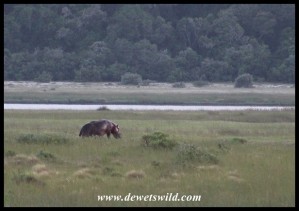 Hippo walking back to Lake Bhangazi 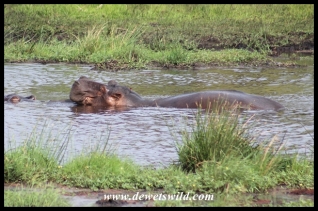 Owing to a declining population due to poaching and loss of habitat, the IUCN considers the Hippopotamus to be “Vulnerable” and estimate that the total African population numbers between 125,000 and 148,000. It is estimated that there are at least 5,000 (and probably considerably more) Hippos in South Africa, where they now occur naturally only in the Lowveld of the Mpumalanga and Limpopo Provinces and the north of Kwazulu-Natal, although reintroductions have occurred outside these areas. Reliable places to see Hippos in South Africa are the Kruger National Park, iSimangaliso Wetland Park and Pilanesberg National Park.

Pod of Hippos in Sunset Dam

Pod of hippos seen in the river from Crocodile Bridge

Hippopotamus in the rapids below the causeway

Hippos yawn as a threat