While I doubt it reached proportions that would convince the Pharaoh to allow the Israelites to leave Egypt, the “eruption” of little froglets we saw at uMkhuze Game Reserve during our recent visit was quite fascinating. Rain or shine, literally hundreds (if not more) of tiny frogs could be seen jumping around on the roads all over the reserve, making driving quite tricky if you didn’t want to squash them under the vehicle’s wheels. 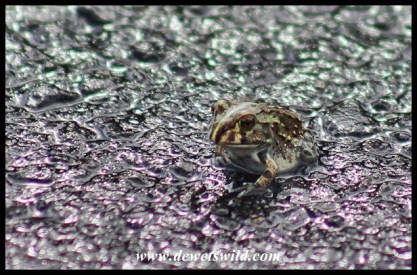 Thanks to the help of the iSimangaliso Wetland Park the little ones were identified as juvenile African Bullfrogs (also known as Edible or Lesser Bullfrogs), a species that occurs over wide areas of Eastern, Central and Southern Africa, and indeed is eaten by humans in many countries where they occur. Though these newly metamorphosed juveniles were only about the size of a thumbnail, the African Bullfrog can grow to 12cm in length.

They can be found in seasonally flooded savannas and grassy woodlands, remaining dormant underground for most of the year (up to 10 months) and emerging only when sufficient rain has fallen for breeding to commence. During the breeding season males act very aggressively towards one another and will even kill each other. Eggs are laid in well vegetated, shallow, seasonal bodies of water where the males guard the eggs and tadpoles against other males and predators. Interestingly, when the tadpoles’ pools start drying up the males will dig channels to deeper pools. African Bullfrogs feed on a variety of invertebrates and small vertebrates, including other frogs, and feature in turn in the diets of various species of birds, reptiles and mammals (humans included).

During a visit to the Kruger National Park in December 2019 we witnessed the breeding habits of the African Bullfrog following a few days of continuous rain.